After the Round #2 bye week for the Seahawks, Saturday’s second games of the season for the Colts and Division One teams against the UNSW Raiders displayed the full spectrum of football emotions.

The Colts team allowed fumbles to hamper their first half; with turnovers in the red zone, the Seahawks would only go in to the half time break up 12-6 after touchdowns to DJ Mauga-Hall and Justin Whiting. 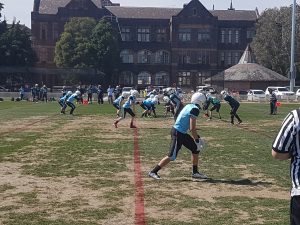 An Ethan Fishburn sack and forced fumble and a Cooper Sly recovery made up for some of the poor field position from turnovers. The continued tightening of the defence in the second half set up Nick Predkowski’s 16 yard catch and run to the end zone.  2 of Predkowski’s last 3 receptions converted on 3rd down, finally allowing Whiting to add a 2nd rushing TD and 26-12 final score.

In Division One, the Seahawks started atrociously, giving up field position on special teams and going 12 points down at the half. Rallying through improved play in all 3 phases, H-back Trent Mamacan scored his maiden TD in just his 2nd career game  and receiver Mitchell Read had a 28 yard catch and run for touchdown to grab a 16-12 lead.

When defensive lineman Blake Zumot blocked a punt and recovered the ball on the 1 yard line it set up a 24-12 Seahawk lead, 24 unanswered points. The Raiders would go on to score twice themselves and with less than 2 minutes on the clock drove the ball into field goal range before slotting over the game winner and quashing the comeback attempt.

In Week #4 the Seahawks will play at Neptune Oval Revesby. The Colts team kicking off against the Predators at 11am whilst the Division One team plays at 3pm.