The Sutherland Seahawks opened the season with a 32-12 win over the Western Sydney Pirates.

The Western Sydney Pirates caught the Seahawks napping on the opening play with a kickoff return touchdown. But the Seahawks’ offense didn’t take long to get in rhythm; a 6-play drive capped off by a Steven Gamu touchdown run.

The Seahawks Defense bounced back with a quick turnover as rookie linebacker Ethan Scott recovered a fumble at the Pirates 16-yard line. Quarterback Perry Cunningham took an immediate deep shot to wide receiver Spencer Christlo resulting in a touchdown pushing the Seahawks to a 14-6 lead. 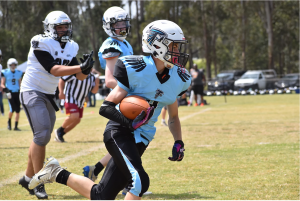 Another quick defensive drive allowed the Seahawks offense to game plan a 5-play touchdown drive, with rookie running back Blake Maddock diving towards the pylon for the score.

The Seahawks defense couldn’t get off the field during a Pirates 16-play drive. Two 4th down penalties kept the drive alive for the Pirates resulting in a touchdown. 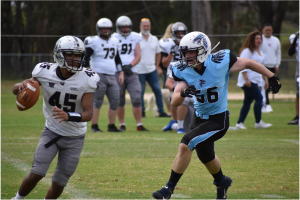 A 4th quarter grind by both teams chewed the clock and the defense was able to keep the Pirates scoreless in the second half.

With a week 2 win in the books, the Seahawks turn their attention to the North Sydney Rebels in a week 3 battle at Forestville Park.