With over 450 yards of offence, the Seahawks Colts team stretched its unbeaten streak to 26 games with a 42-22 win over the UNSW Raiders team.

QB Justin Whiting added 159 yards rushing to his club record 226 yards passing yards, the Raiders able to keep in touch for a period with returning 2 kickoffs for touchdown.

Excellent 2 way performances from Blake Zumot and John Englezos kept the physical part of the game firmly in the Seahawks hands, whilst receivers Nick Predkowski, Cory Dean and Harry Clarke, all just 15 and 16 years old,  combined for the highest number of receptions in a Colts game for the club.

The Division One team wold not be as successful. Coming away from 3 trips to the Raiders redone empty handed the game was made worse as the team started to leak starters through injury.

Taking his first snaps ever at QB, Jason Lambropoulos rallied the team to a 12-6 scoreline in the second half before the Raiders pulled away winning 24-6.

Next week the Seahawks Division One team will play the Northwestern Predators 6.30pm following the Colts game at Greystanes. 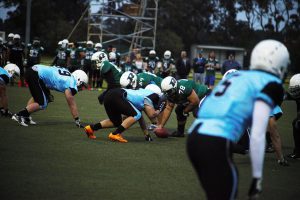