The Seahawks Colts team opened its 2016 season and championship defence with a dominant 54-14 victory over the Sydney University Cubs. The Division One team had no such success going down 63-0.

After trading opening scores, the Seahawks Colts team continued to add a touchdown on each possession except one.

The defence had 5 sacks, rookies Christian Mann and Cooper Sly leading the tackle count whilst 7 new starters took up the challenge on holding the record standards of the 2015 unit.

The Colts team will travel to Newcastle next week to play the Nepean Ducks.  The 1pm kick off will be at Walters Park Speers Point. 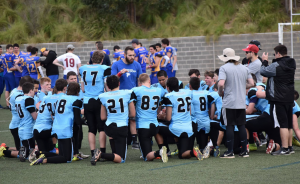 It was essentially the opposite experience for the Division One team.

Just 2 games into the 2016 season and with holes in the roster, running into the perennially dominant Sydney Uni Division One team only went in one direction.

Making just 6 first downs with back up Qb Justin Woodman and unable to punt a continuous short field allowed for the significant scoreline. Despite 3 turnovers by Seahawks defensive backs a 35-0 half time score finally settled at 62-0, the largest loss by a Seahawks team for many seasons.

A quick re-group is necessary for this week’s game vs the Nepean Ducks at Walters Park, Speers Point, 6pm kick off.