The Sutherland Seahawks Colts team extended its early season success to two games with a tremendous defensive performance over the Wollongong Brumbies.

The Defense scored 20 points in the game, whilst the Offense made good of its 7 possessions to score 42 of its own. The 62-0 final score represents a club record for the Colts team in margin of victory.

The Brumbies were re-entering the Colts division after 2 years away. The 2011 and 2012 Champions brought multiple first year players into the game for their first outing and result was one-sided as could be expected. The Defense had 8 sacks altogether in the game, and 6 takeaways; both team records. The Defense also returned 3 takeways for touchdowns as well as closing the game out with a safety, 20 total defensive points was a club record.

Jackson Young had 4 sacks, which tied for a club record and 4 fumble recoveries; an outright club record. Two of his fumble recoveries were returned for touchdowns. The Seahawks are yet to give up a point in 2015 after conceding 10.9 points per game in 2014.

Qb Daniel Besz continued his great start to the year, throwing 4 touchdowns to go with his 5 in Week #1, putting him on course to attack the Colts club record of 26 for the year.  Rookie Tight End Jake Wedesweiler caught 3 touchdown passes including a 65 yard reception to start the 2nd half.

Next week the Colts will play the North West Sydney Predators at Walters Park, Speers Point Newcastle. Kickoff will be 5pm.

In Waco, Texas ex-Seahawks Blake and Sean Muir took the field at Lamar University in their home opener. The out of conference game vs the lowly rated Lamar was never supposed to be too difficult but the cardinals played well. The 66-31 final score was closer than many thought it would be. 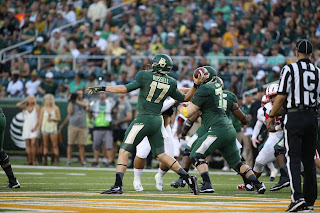 Blake made his 26th career start, playing Left Guard. Sean played on PAT/Field Goal. The Bears are rated $6 in the Coaches Poll today and will have the week off before playing Rice at home in two weeks time.