The Sutherland Seahawks Colts team defeated the ACT Monarchs 50-17 in Canberra on Saturday in a new initiative for 2015 that coincides with a change in the scheduling of the 2015 GNSW Colts season. 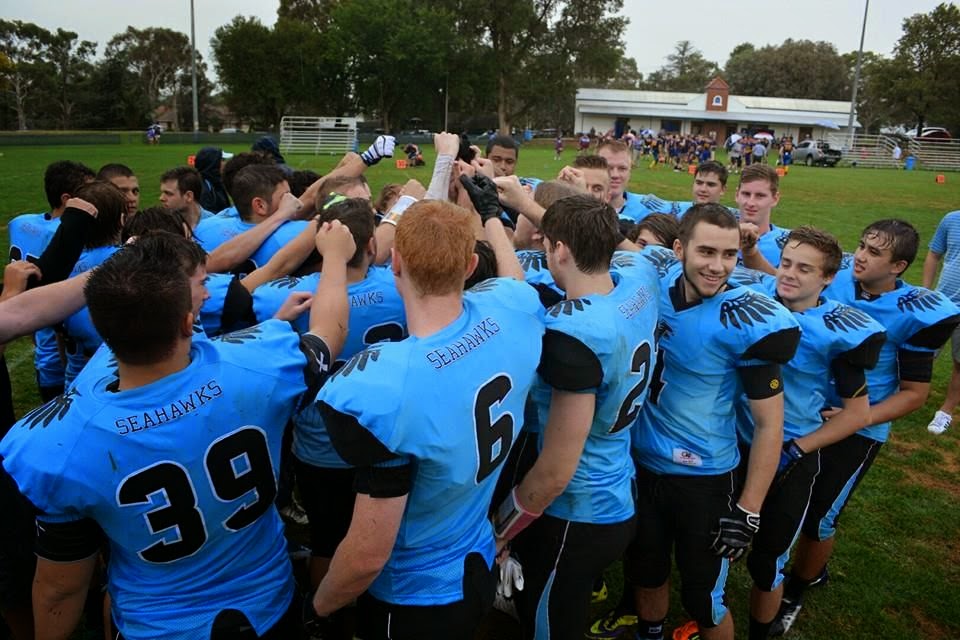 The ACT Monarchs have used this week working with US coaches to prepare, in a program designed to expose those players to professionals and the methods used in US High School football.

Sponsored and managed by Ascension Sports in collaboration with ACT Gridiron, the game pitted club football against state team style football; both teams including rookie players for the contest.

The Seahawks would score first, the defense forcing a punt followed by Qb Daniel Besz crossing for a 6 yard touchdown and early lead. The Monarchs would reply with a drive inside the Seahawks 15 yard line before being forced to settle for a field goal and 8-3 Seahawk scoreline.

On the ensuing kickoff return, Defensive Captain Alex Mellor returned the ball back inside the Monarch 5 yard line. The shortened field set up Besz’s second score on the ground, the missed 2 point conversion sailed over a receivers hands. Seahawks extending to a 14-3 lead.

Rookie Defensive Lineman Austin Wilder made arguably one of the plays of the game. His interception as the Monarchs QB was pressured by rookie defenders Evander Filemu and Storm Pasfield was run back 64 yards for a touchdown. Fellow Rookie Corey Delvalle converted with the 2 point PAT.

Receiver Leroy Heta extended 2 drives through 3rd down conversions. His second set up veteran Aaron O’Neill for a 21 yard touchdown pass from Besz. On the next offensive possession, a 41 yard catch and run properly rewarded Heta for his excellent practices and ascent to being one of the teams primary receivers; stepping up from last year’s rookie season. Heta’s score put the Seahawks up 36-3 at the half.

The third quarter was marred by rain and thunder. Running Back Haoping Tang provided some of that thunder, impossible to tackle from 13 yards out and extending the lead to 44-3.

A 30 minute delay for thunder and lightning almost threatened to end the game early. The wet conditions caused the Monarchs to have tremendous trouble with their Center to Qb exchange. Another Seahawk rookie, defensive back Nick Wilcox, made a great opportunistic and heads-up play when he landed on a loose Monarch ball in the endzone. The 50-3 Seahawk lead finished the scoring for the Seahawks whilst the Monarchs were able to make two late scores of their own.

Misdirection, end-arounds and Qb sweeps had been the majority of their offense and through persistence reached a final 50-17 scoreline.

The Seahawks coaches were extremely happy to be able to play the game after the 2015 Colts season had been announced by GNSW to change its starting date to August. New and returning players were able to be rewarded for their off season and preseason efforts.