The Sutherland Seahawks extend their undefeated streak to 4-0 with a thriller come from behind victory against the Sydney University Cubs.

The Seahawks were slow to wake up for an early Saturday morning kickoff as both the offense and the defense struggled in the first half. The offense went for a 6-play drive before turning the ball over on downs in the Cubs half. 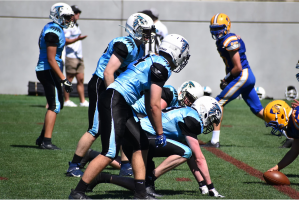 The defense was still rubbing the sleep from their eyes as the Cubs took advantage with a deep shot on their first play from scrimmage. Sydney Uni’s quarterback threw a touchdown to a receiver in the corner of the endzone to cap off the drive. Cubs hit the lead, 6-0.

The Seahawks offense returned to the field but stalled after 5 plays resulting in a punt. Punter Matt Hull kicked a terrific punt landing inside the 10-yard line. The defense held strong with two sacks by rookie linebacker Lachie Williams.

The offense returned to the field but to no avail as a fumble set up the Cubs in good field position. The Cubs offense taking advantage of the turnover with a deep shot towards the endzone. The catch and run resulting in a touchdown. Cubs further their lead, 14-0.

The Seahawks offense was motivated by their turnover and drove the field in 7 plays; running back Steven Gamu punched in the 2-yard touchdown to get the Seahawks on the board. Cubs lead 14 – 6. 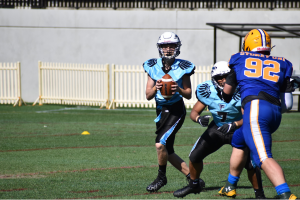 The defense was starting to roll but couldn’t manage to get off the field. The Cubs converting multiple 3rd downs throughout the game. A 13-play drive that chewed the clock played to the Cubs advantage. But the defense holding tight and creating the turnover on downs gave the Seahawks offense the ball with 5:45 minutes left on the clock.

The offense progressed forward each play on the drive, the ‘hawks finally feeling the momentum. A jet sweep pop up pass allowed wide receiver Spencer Christlo to get on the outside with plenty of work to do. Spencer beat four tackle attempts on the 23-yard touchdown reception which flipped the game. The Seahawks lined up for the 2-pt conversion attempt. Quarterback Perry Cunningham making a great read and finding receiver Matt Hull open for the score. Game tied 14-14. 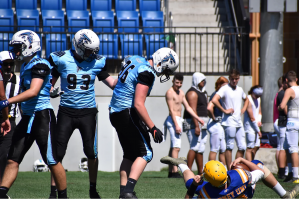 The defense returned to the field with one goal in mind, get the football back. The 6-play drive saw Sydney Uni reach midfield. With three defenders in the face of the quarterback, he forced an errant throw. Linebacker Albert Johnson intercepted the ball and made a short return. The consistent pressure by the defensive line forced multiple incompletions on the day.

The offense at midfield was ready to hit the lead and it only took 1 play. A quick throw to wide receiver Harry Clarke allowed him to beat a defender and fly down the sideline. Making 3 tacklers miss, Harry raced into the endzone for the go-ahead touchdown. The offense, the sideline and the away fans erupted at the sight of the score. Seahawks 22-14. 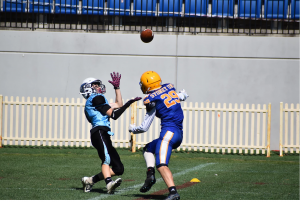 Sydney Uni began their drive on their own 15-yard line. The Seahawks defense needed one more stop to cement the comeback victory. A blitzing Lachie Williams pressured the quarterback into looking to throw, and defensive end Finn McNamara intercepted the football at the 10-yard line. The interception solidified a second-half shutout by the defense and sealed an incredible come from behind victory for the Sutherland Seahawks.

The Sutherland Seahawks will be looking for a more complete performance next week against the Wollongong Mustangs at Neptune Park, Revesby.