The Sutherland Seahawks faced the Ducks for the 3rd time this season. This time, it was for a spot in the Championship.

The Seahawks defeated the Ducks in both regular season games but knew this wouldn’t be an easy feat. The respective number 2 and 3 teams on the competition ladder had a feeling this game would go down to the wire.

The ‘Hawks received the ball first and knew if they were going to win this game they would have to score a lot of points. The number 1 ranked offense was ready for the challenge. A first drive 58-yard touchdown run by running back Blake Maddock blew the doors off. Seahawks 8-0. 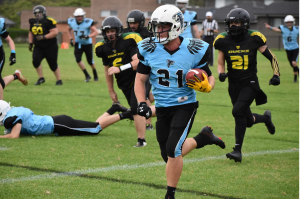 The Ducks responded with a stout running attack. The 6-play drive appeared over before the Ducks’ quarterback converted a 3rd and 12 with a deep touchdown pass. Seahawks lead 8-6.

After exploding for touchdown drives, both teams stalled their second possession and were forced to punt. The Ducks sent a booming punt down the field and the pressure by a tackler forced a Seahawk fumble deep in their own half. Ducks would recover. The Ducks took advantage with a 5-play scoring drive and took their first lead of the game. Ducks 14-8.

The Seahawks offense was quick to pull the trigger as quarterback Harry Clarke found wide receiver Matt Hull three times on the scoring drive including a 33-yard touchdown pass down the sideline. Seahawks reclaimed the lead 16-14. 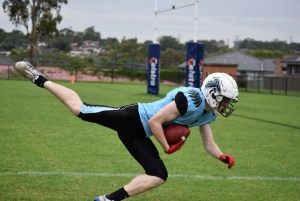 The defense tightened with a bend but don’t break attitude before halftime. Outlasting a 7-play drive by forcing and recovering a fumble. The offense tried to push the ball downfield before halftime but to no avail.

The defense would try to make amends for their slow start but couldn’t get things right. The 10-play Ducks drive resulted in a touchdown run up the middle. Ducks 22 – 16. 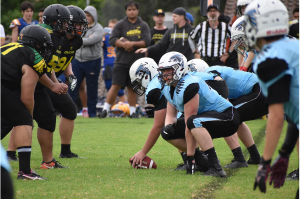 The Ducks started to push the ball and the ‘Hawks defense was looking for any sort of momentum. An interception by defensive back Seb Riley gave them a spark they would need for the 4th quarter. 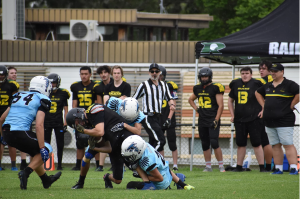 The offense continued to roll and made the most of the field position from the turnover. Another fast scoring drive resulted in a Matt Hull touchdown grab in the end zone, his second of the day. With a chance to push the lead to two possessions, they couldn’t convert the 2pt giving the Ducks a chance being down 8 points. Seahawks lead 30 – 22.

The Ducks with a lifeline felt the urgency and drove down the field for an 11-play drive converting multiple 4th down attempts. The Ducks threw a deep touchdown pass over the middle. The Ducks down by 2 needed the conversion and kept the ball in the air to do it. Scores tied 30-30.

With minimal time left, the Seahawks offense was forced to punt. The defense had a chance for redemption. The Duck’s quarterback threw the ball outside the numbers on a deep route and cornerback Will Atkinson intercepted the ball sealing overtime for both teams. 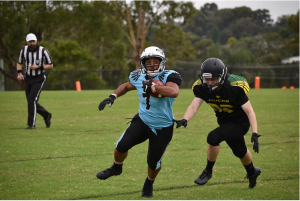 The teams were headed to overtime, a just result for the shootout they had been in all game. The Seahawks defense took the field first and blew a coverage on the first play. Ducks 36-30. The Ducks would have to convert the 2pt play to really give the Seahawks offense trouble during their phase. The Ducks threw the ball up on a fade but it fell incomplete through the receivers grasp.

The Seahawks offense drove the condensed field on 4 plays resulting in a Harry Clarke scramble for a touchdown. Game tied 36-36. The Seahawks now with the chance to end the game and book their spot in the championship game. Quarterback Harry Clarke scrambles right looking for a receiver before ducking his shoulder and making a would-be tackler miss with some footwork and ran into the end zone. The sideline erupted! Sutherland Seahawks are going to the Kookaburra Bowl! 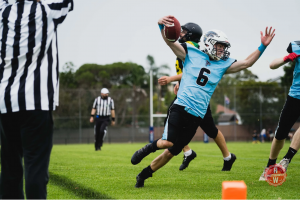 With a championship on the line, the Sutherland Seahawks will face reigning Bowl champions, UTS Gators at PointsBet Stadium, 2:30pm Saturday.