With the Colts team off for the week, the Division One team made the trek to the Central Coast to take on the Sharks.

2017 has been a poor year so far for takeaways but the Sharks gifted 2 turnovers in the first quarter which allowed an early 16-0 lead, both Zach Hughes and Aaron Beyer scoring in the air.

The Sharks did not run the ball well but their passing game was fierce by comparison. With 50 pass attempts, a very high number for a GNSW game, they ended up with over 300 yards in the air and 4 passing touchdowns. After a 16-8 deficit, the Sharks closed to 30-22 after an on side kick recovery. Seahawk Safety Tony Nghiem however made a timely interception (his 2nd of the game) and returned it 33 yards for a touchdown  which quelled the Sharks comeback. 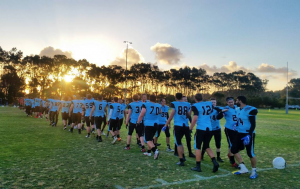 The 36-28 final score gave the Seahawks Division One team a much needed 2nd win for the year and prepares for next week’s vital game against the Nepean Ducks.