What are some differences between the Baylor College program and the 49ers Professional program? Blake might be the only person who has played in both the Briles Spread and Kelly Spread systems. These have been major innovations in the offence game for the sport in the last 10 years. Without giving away too much:-

Other differences that you may not think about….

Sean lifting yesterday in the gym and Blake is back in the gym this week at home. 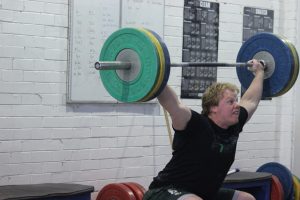 The 49ers Rookies took a tour of Facebook headquarters. Footage of the tour can be seen in this link to the 49ers website.


Check out the gallery of 49ers rookie players taking in the sights on San Francisco before breaking for summer.

@49ers Rookie Class taking a ride on RocketBoat, the fastest thrill ride on the Bay. pic.twitter.com/15LsFFRGL6

From a few days ago, Blake at practice with Coach Clements. 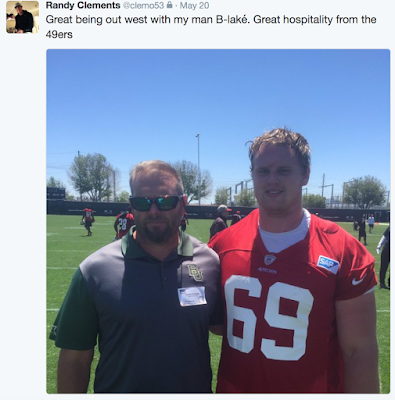 The 49ers have one more day of their 3 day mini camp before breaking for summer. Blake will then get a chance to return home.

Baylor’s new Head Coach Jim Grobe has spoken to the media for the first time.

Meanwhile in Santa Clara where the 49ers have their training facility, this is the break down of 1st, 2nd and 3rd team OL on OTA’s as reported on Ninersnation.

The 49ers have 3 days of mandatory mini camp next week before breaking over the summer break for 6 weeks.


Baylor has welcomed new Head Coach Jim Grobe to take over for the 2016 season.

Grobe retired from Wake Forest after the 2013 season. From the official announcement from the Baylor Athletics page…..

McCaw has asked that the University distribute the following statement on his behalf:

“After much reflection and prayer, I have decided that a change in
athletics department leadership is in Baylor University’s best interest
in order to promote the unity, healing and restoration that must occur
in order to move forward. I have always sought to put the University’s
needs ahead of my own. My time at Baylor has been an incredible journey
filled with some of the most remarkable people I have ever known. I am
grateful to Baylor Nation for its support and dedication, and to all who
have done so much to advance the athletics program.”