HUGE WEEKEND ALL ROUND AS SEAHAWKS COLTS DEFEAT WEST SYDNEY AND MORE…..

The Sutherland Seahawks defeated the West Sydney Pirates team 40-0 in the opening game of the Gridiron NSW 2015 season.

QB Daniel Besz threw 3 touchdowns to Justin Whiting as well as running in another himself as the offense racked up 300 yards of offense as the game was shortened when the Pirates started to lose players to injury. 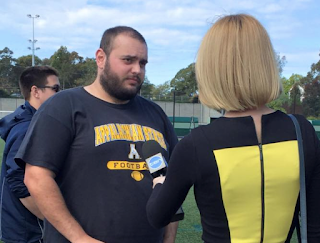 With so much attention from the Jarryd Hayne NFL story, Channel 10 even had a camera crew at the game, Head Coach Christos Lambropolous was interviewed prior to the game, while the game featured as a part of a news story on the evening news.

Defensively, the Pirates were limited to 41 total yards from scrimmage, Jarrad Atkins and Sasha Simic leading the team in tackles whilst Jackson Young and Austin Wilder combined for a tackle for loss creating a safety. Clay Hansell, meanwhile had the rare combination of recovering a fumble and having a pass break up on defense, and then having his first ever receiving touchdown for the offense. 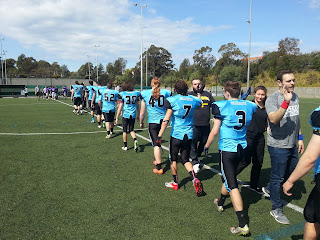 The 28-0 half time scored was extended to 40-0; two of the team’s youngest players Corey Delvalle and Nick Predkowski were excellent contributors for the offense. Predkowski catching an 18 yard PAT for 2 points after a penalty backed the offense up and Delvalle had 50 yards from scrimmage rushing and receiving.

Next week the Colts team will travel to Wollongong to play the Brumbies, 3pm at Corrimal.

In other news, the Seahawks Junior program was featured in a story also connected to the latest NFL news. 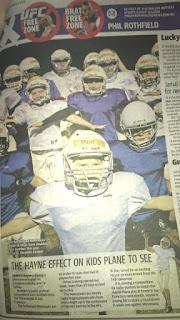 And last but not least; whilst the Seahawks Colts team was notching up the points, the Baylor Bears  over SMU notched up 56-21 in its first game of the 2015 season. Ex-Seahawks Blake #73 (2009) and Sean Muir (2009-2011) were a part of a Baylor offense that had 723 yards from scrimmage and averaged over 10 yards per play. Full details here. 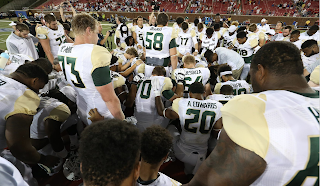