A tackle for loss by defensive lineman Peter Tanti sealed the first game win for the Sutherland Seahawks over the Newcastle Cobras on saturday. 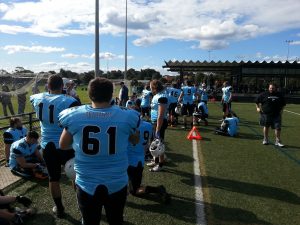 After Round One was called off due to ground closures and rain the Seahawks had to wait till Round Two to get the season underway. The squad jumped out to a 12-0 lead with touchdowns to Zach Hughes and Rookie Lachlan Hutchinson.

Whilst most players have had at least a 1 year lay off with no Division one team fielded in 2015, Steven Nassenstein has had a 5 year wait since Colts football. Second on the tackle count, stepping in to start at middle linebacker to cover for a game day sickness, his 8 tackles were characteristic of the game; many players back in serious action after a significant period off.

Billy Lennon’s 2 sacks stopped Cobra scoring chances including an initial 4th and goal in the first half in a game where the Cobras were extremely consistent in making yards on the ground and passes off playaction.

Up 26-18 at halftime, the Cobras narrowed the margin to 34-32 as Seahawk QB Daniel Besz exited the game on a late hit. Running Back Tristan Whitings’ 11 yard rushing TD with 4 minutes remaining could have been the end of it all and 42-32 lead but the Cobras rallied. A quick drive got them down to the Seahawks red zone. A turnover on downs backed the Seahawks offence up followed by a mix up in the backfield resulting in a safety. A safety punt and touchdown drive later set up the key stop by Tanti to secure the win.