DEFENCE FINALLY CARRIES THE LOAD FOR A CHANGE WHILST COLTS GO UNDEFEATED.

The final regular season game for the Division One team will determine where the Seahawks will finish on the table and whom they will play in the opening round of the playoffs.

A 10-0 Seahawks victory over the UTS Gators was set up with the best defensive effort of the season for 2016. Allowing just 46 total yards from scrimmage, the defence scored first after a long punt was downed inside the 5 yard line. 2 plays later, linebacker Harrison Brindle’ sack opened the scoring.

A 44 yard touchdown to receiver Aaron Beyer extended the lead in what was one of the more disappointing games for an offence that has improved enormously with new systems this year.

Next week the Seahawks will play the Central Coast Sharks, a team that needs to win to make the playoffs. The game will kick off 3.30pm Saturday at Neptune Oval Revesby.

Missing several starters Qb Justin Whiting again stared, rushing for 3 TD’s and throwing another to tight end Jake Wedesweiler who returned after missing 3 games. Nick Predkowski played his first game at running back and kept the chains moving with several key receptions to of the backfield; corner Albert Johnson had his first career interception.

The Colts team will have 2 weeks off due to the final round bye week then as the #1 playoff team the week after. 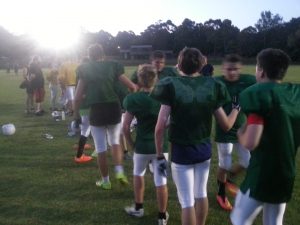 In Junior football on friday night the Green Tanks gained a close 44-42 victory over the Blue Devils whilst the Yellow Jackets remain undefeated with a 34-23 win over the White Wolves.