The Sutherland Seahawks Colts team won their 5th straight and 10th overall GNSW Colts championship on saturday with a 28-26 victory over the Sydney University Colts team. Quaterback Justin Whiting had a career high rushing day with 208 yards including touchdowns of 52 and 39 yards; Nick Predkowski joined him with additional two touchdowns, one each in the air and on the ground. The Cubs scored first which started a series of exchanges of the lead. Up 14-12 the Seahawks twice had a touchdown taken away via penalty. Starting with the ball in the second half though, the Seahawks were able to score then get an interception from safety Ned Rickard followed by another score and 28-12 lead. The Cubs were able to close to 28-26 before a 3rd touchdown was brought back via penalty; the Seahawks finished down on the penalty count 10-1. 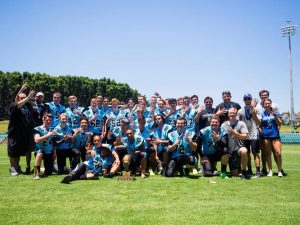 Pleasing to note is that no player has played in these 5 straight Colts Championships and only 1 player Justin Whiting has played in 4. Colts football by rule turns over the playing roster demanding the coaching and team culture be tasking with replacing talent every year.