The Sutherland Seahawks make a statement as they roll through the Northern Sydney Rebels, 32-6. 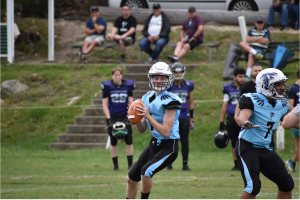 The Seahawks came out strong and had no signs of looking flat. A quick stop came for the defense as Linebacker Ethan Scott dived on a loose football, setting up the offense at the Rebels 11-yard line.

The offense struck quick as running back Steven Gamu juked his way to an 11-yard touchdown run. The defense picked up where they left off last week with another short drive. The Rebels dedicated rush attack allowed the Seahawks defensive line and linebackers to get into a rhythm early with two tackles for loss in the first 2 drives.

The Seahawks offense returned to the field and drove into the Rebels red zone with a mixed play selection. A quick first quarter was in the books and the Seahawks were burdened with a 4th and 12. Quarterback Perry Cunningham was able to find wide receiver Harry Clarke open in the corner of the end zone for the 22-yard score.

The offense drove the field through the air and running back Blake Maddock was eager to find his way into the endzone. Maddock sprinted to the corner pylon; and in an effort to reach across the goal line, fumbled the football. Harry Clarke provided a heads up play recovering the football in the end zone, resulting in 6 points for the Seahawks.

The Seahawks offense scored 3 from 4 drives, and the defense stayed hot, holding the Rebels to 0; allowing only 1 pass completion before halftime. 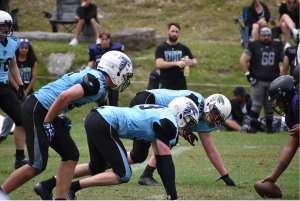 The defense continued its hot streak as a punt pinned the Rebels offense on their own goal line. An aggressive play call allowed rookie linebacker Lachie Williams to fly into the backfield for a safety; the defenses first score of the season.

The Seahawks offense stalled during the second half of the game, with the Rebels coming away with 2 forced punts and two turnovers. The Rebels would take advantage of the short field going on to score a touchdown through the air. Although, the Seahawks defense continued to rally together and it would be the only score against them for the day.

Seahawks running backs took turns toting the rock in the 4th quarter as Perry Cunningham finished the drive by throwing his 2nd touchdown pass of the game. Wide receiver Trae Stephens hauled in his 2nd touchdown of the season. 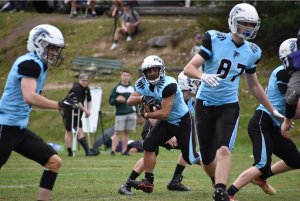