The Sutherland Seahawks Junior Gridiron competition was taken out by the Mitchell Wiseman coached ‘Yellow Jackets’, 34-20 over the Green Tanks.

The game had to be pushed back from the friday night due to severe weather and ground closure, but that didn’t stop the Yellow Jackets from continuing on their undefeated streak. 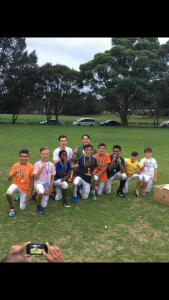 Up 16-14 at the half, the Yellow Jackets scored first when Zyon Iosefa caught his 3rd of what would end up being 4 touchdowns for a 22-14 lead. A defensive stop by the Jackets via Seb Riley’s 12th interception of the year, led to another Iosefa touchdown and seemingly unassailable 28-14 lead.

The Green Tanks have been the highest scoring team in the competition, with 3 different players scoring at least 10 touchdowns. Bailey Ambrosi’s touchdown drew the score to within reach at 28-20 but with only a few minutes remaining. Trying to wind down the clock the Yellow Jackets claimed a crucial first down and finally, as often happens under such desperate defence, ball carrier Ryan Williams broke free for a touchdown as time expired.

With his 4 touchdowns, a forced fumble and an interception, Zyon Iosefa was named game MVP. 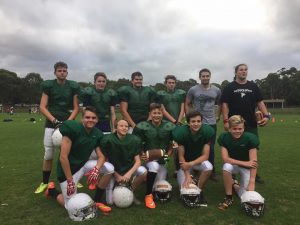 The Green Tanks led the league in touchdowns but couldn’t get the final win.

It was a second successful year for the Seahawks Junior Gridiron Program. New players, coaches and officials were exposed to the game. Games and practices were accessible and costs were a reasonable entry point and very competitive with sports that don’t have nearly the same amount of equipment needs.

Teams improved as the season went, the White Wolves had the poorest record but won their last 2 games demonstrating excellent tenacity and enthusiasm. Daniel Mauga-Hall won the award for league leading scorer finishing with a mighty 44 touchdowns, extending the record set in 2015 of 27. 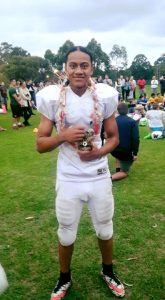