Its been a long 2 weeks for Blake and Sean. The Baylor football team has fallen on hard times with a narrow loss at Texas on a lat field goal then a very bad performance at home to TCU. There are multiple distractions going on at an administration and football department level and it has resulted in a drop in competitiveness. Next week Baylor travels to Oklahoma to reform their season.

Blake is on the move again. With Green Bay bringing back a player from the PUP list and moving several injured players in and out of the active roster he had to make way. After visits to Kansas City and to Atlanta he is now on the Atlanta Falcons practice squad. More news will be posted when it comes to hand. 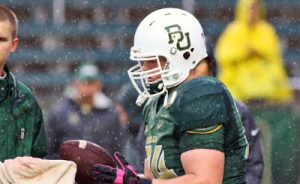