A pretty dismissal performance ended the Sutherland Seahawks ‘ 2016 Division One season. A 31-6 loss to the Northern Rebels was a dour finish, with the Rebels dominant for much of the encounter.

The Seahawks continued to have trouble with a passing game that has had a lot of effort put in for the 2016 season but has struggled in the final 3 games. Throwing 4 interceptions, the offence could not make any head way to make up for a terrible start by the defence. Poor field position and simple assignment issues allowed the much more physical and enthusiastic Rebels easy points.

Down 19-0 at the half a well executed punt return by Billy Lennon put the game somewhat in reach however more late scores and injuries at the QB position quickly halted any comeback.

A 5-5-1 record was hardly an overwhelming success for 2016 in what has been a significant drain on resources. 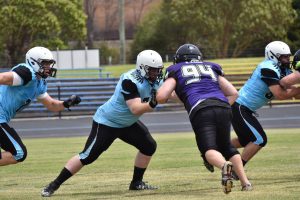 This saturday the Colts team will play in the semi final against the Sydney University Cubs. In the first game of the season, the Seahawks won 54-14 against the Cubs, the winner of this game will go to the Championship Game the following week.

Kickoff this saturday will be 11am at Neptune Oval Revesby.