The Colts team started out with a deep strike to receiver Cory Dean and short rushing touchdown to Quarterback Justin Whiting. Still finding its feet with 5 new starters from the 2016 championship team, the defence leaked some points. The 16-14 half time deficit was stretched to an 8 point UTS lead before a Steven Gamu run for 60yards resulted in a touchdown, the 2 point PAT tied it up at 22 with less than 10 minutes remaining.

Down 28-22, a fade pass to Cory Dean again found the end zone, the unfortunate PAT hitting the ground left the Colts team stranded with a rare tie. 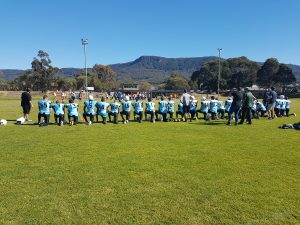 The Division One team also had a solid start, a near length of the field run back by Mitch Read set up QB Tristan Whiting for a short rushing touchdown and 6-0 lead.

The game turned however, from that point on the game was characterised by UTS scrambling for first down after first down and the Seahawks largely stalled. Down 20-6 in the third quarter and with some better gradual field position through adjustments the Seahawks first forced a safety from a bad punt snap. On the ensuing drive Jordan Holman’s 3 yard rushing TD narrowed the score to 20-16 and a chance for a late comeback. Stopping UTS late the 4th quarter set up a final drive but the final passes fell incomplete and notched a first round loss for Sutherland.

Next week both the Colts and Division One team will have a bye week.