Such a strong victory for Baylor over Boise State. The defence had one of its best games ever to win 31-12.

Almost dropped this on his head pic.twitter.com/KWnI4Z4SKk

Sean played in the 4th quarter in relief of stalwart center Kyle Fuller who completed his eligibility in this game.
Full recap can be seen below.

Bowl game is tomorrow; get excited.

This afternoon players got words of encouragement from @BearFoundation members. #SicEm pic.twitter.com/nu34NuRbF3

You can listen to a podcast interviewing Blake and read up on the latest fox sports article on him here.

Whilst the Baylor Bears prepare for the Cactus Bowl against Boise State in Arizona, an interview with new Baylor coach Matt Rhule can be watched at this link. The Cactus Bowl will be 2.15pm next Wednesday afternoon Sydney time. Sean will be the back up center.

OL Blake Muir wearing the black jersey as one of the Falcons’ teammates of the week with QB Matt Simms, LB Josh Keyes pic.twitter.com/HPNvNqGA5M

December 7th This tweet is all you need to know right now about where Baylor is at with its Head Coaching situation.

OFFICIAL: We have our new Head Football Coach. Welcome to Matt Rhule and his family. #SicEm ????

December 6th The season will continue for one more game for the Baylor Bears despite their narrow loss to West Virginia on the road 24-21. A full recap can be found here.

Sean and the Baylor football team will now play Boise State in the Cactus Bowl in Arizona on December 27th. All this occurs while Baylor decides on who its next Head Coach is going to be. An announcement could occur within the week.

Atlanta meanwhile went down narrowly to the Kansas City Chiefs; the winning score amazingly occurring via a 2 point PAT attempt returned by the Chiefs, flipping the 1 point lead in their favour. Replay here.

December 1st The Baylor Bears are in a funk that only the announcement of a new coach can possibly lift. Now on a 5 game losing streak, with a trip to West Virginia remaining, the Bears will still get a bowl game invite but its hardly the season finish everyone hoped for after starting 6-0. The Atlanta Falcons ont he other hand came off the bye week to defeat the Arizona Cardinals. They will play Kansas City this week in one of the games of the round. The Falcons hosted families of fallen war veterans at home last week. Blake was able to catch up with some families at practice prior to the game for Thanksgiving. Pic courtesy of atlantafalcons.com 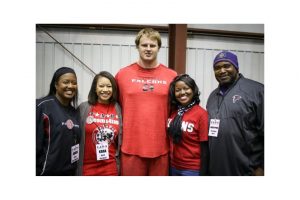