This week marked the beginning of the Seahawks Junior 5 man competition for 2016.

New and returning players have combined with emerging coaches to produce another competitive friday night fixture that will continue through till the end of the year.

In the opening round, the Green Tanks defeated the Blue Devils 58-48 whilst the Yellow Jackets toppled the White Wolves 49-20. Numerous players from last year’s competition have graduated to the Colts team for 2016, in fact 3 defensive starters were Junior players in 2015. 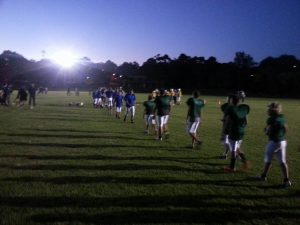 The Colts team was victorious 40-6 over the Northwestern Giants at Greystanes on saturday. QB Justin Whiting found receiver Nick Predkowski twice whilst Running back Oliona Tamoura also scored twice. Whiting is on track to break the club Colts record for rushing, passing yards and passing touchdowns in 2016; statistics that will be kept a close eye on.

Next week the Seahawks play West Sydney at Robert Ziems Park Corrimal 11am.

The Division One team were also able to topple the Northwestern franchise on saturday. Down 6-8 at the half, Qb Daniel Besz linked up with WR Aaron Beyer for his 2nd TD of the game to get the go-ahead.

The defence tightened in the second half, allowing just 23 yards rushing and forcing 3 turnovers. The second of Alex Mellor’s 2 INT’s set up Jordan Holman’s short receiving TD, the second set up Zach Hughes for a short grab after 2 long passes for excellent field position. Corey Schultz’s 24 yard interception return would ice the game.

The win marks the half way point of the season, next up the West Sydney Pirates and their undefeated 2016 so far. The game will be at Robert Ziems Park, Corrimal 3pm on saturday.

Former Seahawks player Sean Muir took a lot of snaps for his college team the Baylor Bears against the Kansas Jayhawks this week. The Bears are 6-0 and ranked #9 in the nation. Sean, a Junior, played 33 games for the Seahawks club at a Colts and Division One level before heading to college to play with his brother Blake now of the Green Bay Packers. Highlights of Sean from this week’s game can be seen below. You can always keep up to date with Blake and Sean Muir on their diary page run by the club.

On a sadder note, last week former Seahawks player and long time official Terry Lauder was remembered at a funeral attended by Seahawks President Peter Upham. Terry played for the Seahawks club starting in 1992 assisting to win the club’s first ever championship in the AA division when the club went 11-1.

Terry was always the most upbeat personality at football. Even in the harshest weather, Terry was a volunteer in the truest sense, a workaholic who should have been able to enjoy a future retirement doing what he loved. He will be missed by family, work colleagues and friends; foremost those at football. 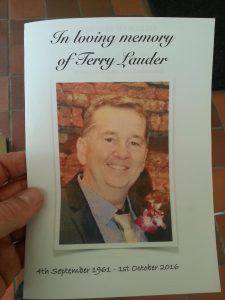